When British racing driver Sam Bird goes out on track to compete in Formula One’s support series this season he will carry the Onlineability logo on the nose of his car. 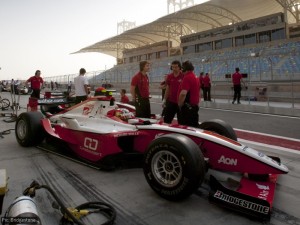 Onlineability, the Hertfordshire-based communications agency that powers the highly-regarded Brits on Pole motorsport site, will be working in 2010 to keep Sam’s website updated as he takes to tracks around Europe as part of the prestigious GP2 series. Visit the website here.

Sam’s early career saw him race in a number of well-regarded junior open-wheel series including Formula Renault UK and British F3 International with top team Carlin, as well as qualifying on the front row for the Macau Grand Prix, Formula Three’s all-star race.

In 2008-09 he graduated to Formula 3 Euro Series as well as testing with the Williams F1 team. He is now driving for reigning GP2 Series champions ART Grand Prix alongside Jules Bianchi, recently signed to Ferrari’s driver development programme.

One of a clutch of young Brits driving in GP2 after a spell during which little home-grown talent featured in the series, he is currently a bright prospect to follow drivers like Nico Rosberg, Lewis Hamilton, Timo Glock and Nico Hulkenberg into Formula One.

The GP2 series was set up in 2005 to provide an affordable training ground for talented young drivers wanting to make a career in Formula One. So far four of its five champions and numerous runners-up have made the step up.

The series races at all the European grands prix giving its drivers a chance to show off their abilities in front of the sport’s movers and shakers on classic tracks such as Monaco, Silverstone, the Nurburgring and Spa-Francorchamps.

Onlineability director Andy Darley said: “After two years of writing about motorsport and the careers of British drivers at BritsOnPole.com, it’s a trememdous thrill to be able to announce this partnership with Sam Bird.

“Talent is only half the battle for young drivers. To be able to market themselves to fans and potential sponsors is crucial, and this is where having an engaging and up-to-date website comes in.

“Sam already has one of the best-looking websites on the grid. Our aim, now we are responsible for its maintenance, is to ensure it’s similiarly on pole position for quality of content, speed of updating and ease of use.”

• For more information about how we can help you make the most of your web presence, contact us.